History of the New Forest Pony 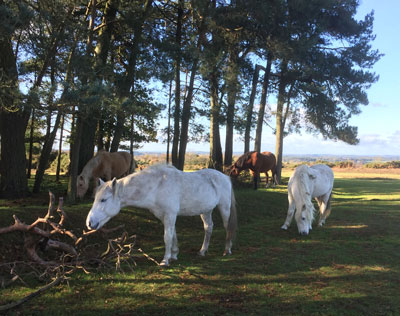 There have been NF ponies in the Forest since the end of the last Ice Age. The Forest and the ponies are inter-dependent. Without the ponies the Forest would be very different, more overgrown with less birds and flowers. Early records include the bones of a 13hh pony at the Roman Villa at Rockbourne and the profits of the Royal Stud at Lyndhurst going to the building of Beaulieu Abbey.

In1507 mounts from the New Forest were shipped to the French wars. NF pony mares were very probably bred to a Spanish Horse standing at the Royal Stud at Lyndhurst rather than the myth of the Spanish Horse swimming ashore from the Armada.!!

The first stallion of real merit was Marske, the sire of Eclipse, sold to a Ringwood farmer when his owner the Duke of Cumberland died and used on ‘country mares’ until Eclipse started winning.
William Gilpin in 1791 wrote “The New Forest Horse is often supposed to be of Spanish origin, some would not disgrace so noble an origin. As the ornament of a Forest Scene, he is always picturesque.”

During the 19th Century they were regularly raced and with prizes of £5 or £10 when wages were £1.25 or less a good pony who might race in two races in an afternoon was a valuable asset. The colts also had the reputation of being excellent harness ponies, fast trotters, strong, docile and patient. Unfortunately this led to the better colts being gelded and sold. A few gentlemen were concerned at the poor standard of stallions and considered the ponies inbred and new blood was needed. The Deputy Surveyor as a sop to Commoners for his endeavour to make them run on their ponies in the winter, borrowed an Arab stallion from Prince Albert but commoners were not to be taken in so very few mares were covered by him.Towards the end of the century the Verderers hired  four stallions Fitz George, Welsh Star, Katerfelto and Bampton Boy & QueenVictoria lent two Arabs Abeyan and Yuresson but Commoners wanted stallions that ran out.

The four ponies scheme ran the stallions out in the summer but kept them in for the winter. The 4 stallions who ran out were Sprig of Shelagh – described as an “Irish steeplechasing pony”, Exmoor, West Highlander and Brockenhurst Joe. The scheme ran for four years.

The first society for the improvement of NF ponies was set up in 1891 to run a stallion show, followed in 1905 by the Burley and District NF Pony Breeding and Cattle Society who started the Stud Book and the Breed Show.

NF ponies served in South Africa with the Forest Scouts in the Boer War and performed better than regular remounts  regularly carrying 13st all day under extreme conditions and on their return they won the Army Jumping competition at Aldershot, how did they manege not to knock down the jumps with their own feet!

The introduction of outside stallions was at its height in the first decade of the 20th century. Most ran out but Field Marshall stood at stud. After WW1 commoners stated that those ponies with the most old forest blood stayed longest on the forest so after 1930 only NF stallions were permitted to run out.

Clothing with society logo can now be ordered direct from the suppliers. You have the choice of having the full logo-with the pony  or just the text. Several colours available. More lines will be added as requested.
Visit Store

We use cookies on our website to give you the most relevant experience by remembering your preferences and repeat visits. By clicking “Accept”, you consent to the use of ALL the cookies.
Cookie settingsACCEPT
Manage consent

This website uses cookies to improve your experience while you navigate through the website. Out of these, the cookies that are categorized as necessary are stored on your browser as they are essential for the working of basic functionalities of the website. We also use third-party cookies that help us analyze and understand how you use this website. These cookies will be stored in your browser only with your consent. You also have the option to opt-out of these cookies. But opting out of some of these cookies may affect your browsing experience.
Necessary Always Enabled
Necessary cookies are absolutely essential for the website to function properly. This category only includes cookies that ensures basic functionalities and security features of the website. These cookies do not store any personal information.
Non-necessary
Any cookies that may not be particularly necessary for the website to function and is used specifically to collect user personal data via analytics, ads, other embedded contents are termed as non-necessary cookies. It is mandatory to procure user consent prior to running these cookies on your website.
SAVE & ACCEPT